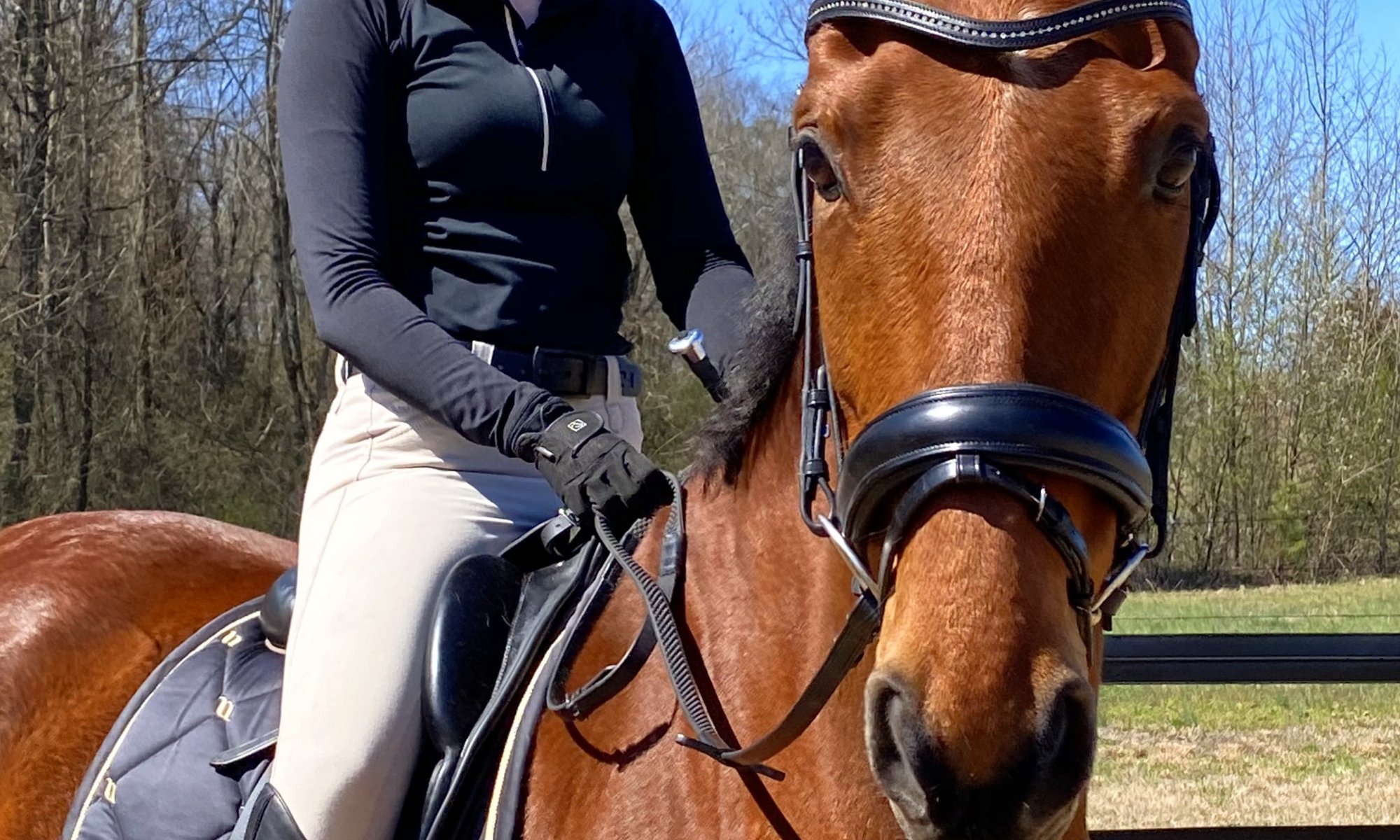 As for me, I’ve been hiding in my house, emerging only to ride my horse and possibly risk my life at the local Starbucks drive-through. If you exclude all of the wallowing in self-pity over the freedoms and plans I’ve lost to the COVID-19 lockdown, I would call it an ideal Tuesday.

Two weekends ago, before the world had entirely shut down, I was able to ride Nautica in a clinic with the amazing dressage rider and instructor, Sarah Dodge. It was a very productive ride, and you guessed it, we made some major breakthroughs! I know I say that about every major clinic (and lesson for that matter), but it’s true every time.

Over these last two weeks, since being on self-imposed lockdown, I’ve had ample time to watch and re-watch my entire 45-minute video Nautica’s clinic ride.

During my ride, Sarah pinpointed Nautica’s biggest struggle right away: gait quality and relaxation (or lack thereof). Immediately, she had me slow my trot and ride Nautica a bit under tempo. Nautica has a tendency to get quick and when faced with difficult or uncomfortable exercises, he uses his speed to “run away” from the work. The quicker he gets, the shorter and choppier his steps become. This wasn’t so much an issue in saddle seat-land when lift was more important than ground cover. Dressage, not so much. We have to artificially create the appearance that Nautica is going somewhere in the trot.

Sarah provided a few exercises that helped encourage Nautica to use his body in a more correct and dressagey way of going. The most helpful was her explanation of the “developing shoulder-in” exercise, in which we used ten-meter circles and leg yields to improve the shoulder-in. By the end of the ride, having controlled our speed and improved Nautica’s response to the lateral aids, he was finally, finally, tracking at the trot! In addition to that, for the first time ever when riding Nautica, I actually felt him begin to swing through his back and lift up under the saddle area. “This is it—he CAN do it!” For brief moments during our ride, I was starting to see a glimmer of hope for him to ever achieve the holy grail of dressage: self-carriage.

Connection with the outside rein ✔
Responsive to the lateral aids ✔
Relaxation through the back ✔
“Welp. I guess I’m dressage now.” -Nautica

All of the exercises Sarah had to share were extremely helpful, but the most interesting advice I got from her was that I needed to keep riding Nautica in the movement, even after I get my desired result.

For instance, before, once Nautica reached a relatively consistent understanding of the concept we were working on for the day (ie. bend, flexion, tempo, etc.) I would end the ride to reward him for the desired behavior. While I was rewarding him, and he was learning the concept, I was only achieving half of the goal—Nautica wasn’t working for long enough in this new, correct way to achieve the physical benefits from it. We were only working at 50%.

While I don’t want to become a “drill sergeant” rider, and I’m definitely not recommending that I drill Nautica in any one exercise, I do need to provide a slightly more intense work environment to encourage the proper muscle growth and the other physical benefits that come along with moving in this new way. Now, once I get Nautica working in this new, correct way, I ride him there for ten to fifteen more minutes and on both reins equally. I’ve found that after using this method, in our subsequent rides, he is easier and quicker to bring back into that correct way of going.