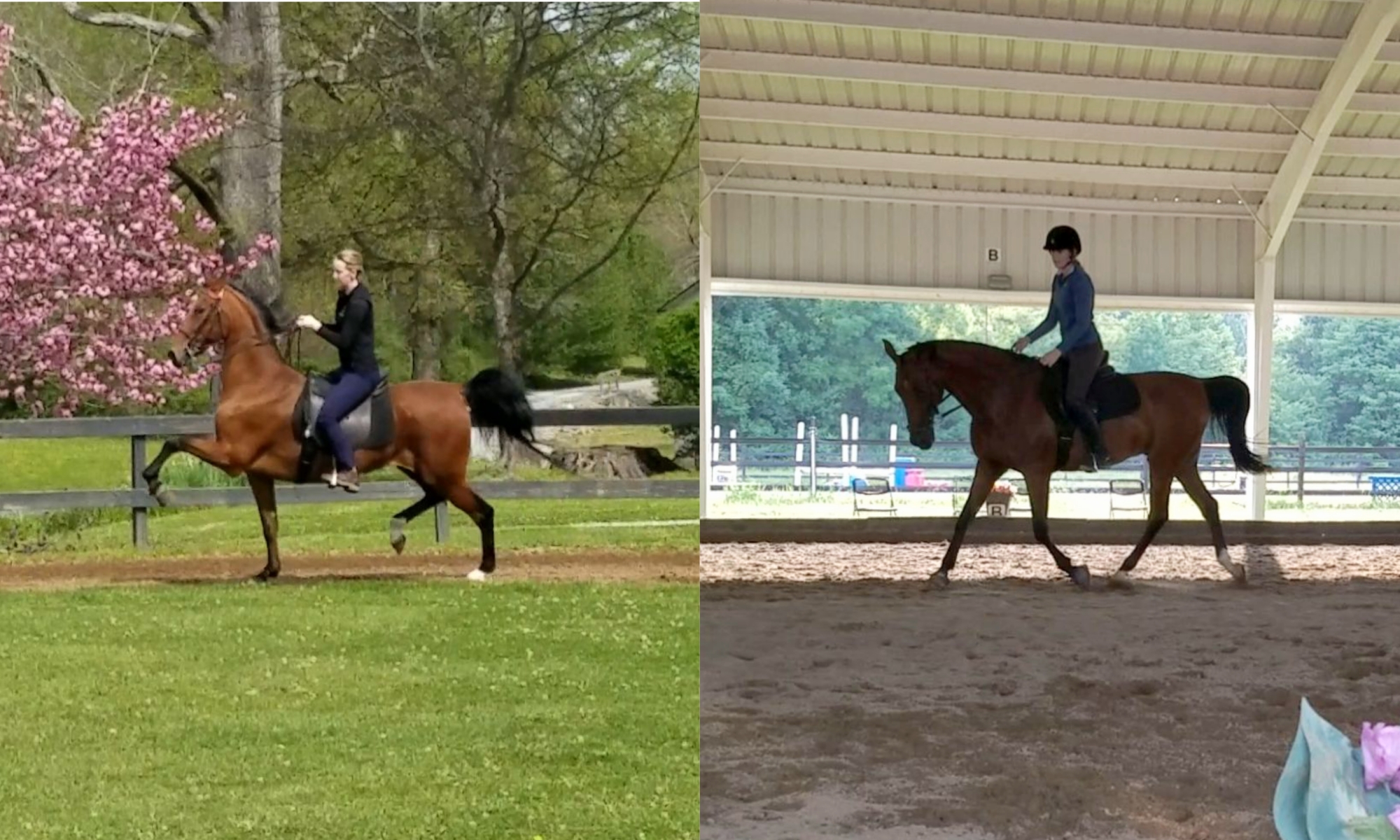 A popular article among dressage enthusiasts has been making the rounds on social media once again. The title goes something along the lines of “Leg Movers vs. Back Movers” and the write-up points out the differences between two types of dressage horses being ridden with the emphasis on the “back mover” horse.

Back-movers are horses that are ridden in a way that is not particularly extravagant or flashy, but more “correct” through their topline and hind end. At least this is the opinion of the article’s author and is supported by images portraying the horses’ leg angles and visible back engagement within the trot.* A Facebook friend of mine recently shared it with a saddlebred sporthorse group. I gave it a “like” and shared a friendly thumbs-up in the form of a comment.

I noticed that another group member had also commented, responding with a broad statement that dressage horses tended to have more back pain than horses of other disciplines, particularly those who are ridden with an emphasis on developing a more back-mover way of going. I found the comment a little odd but intriguing nonetheless, so I did some research of my own.

Internet results came back inconclusive. Horses have back pain more often than not. The words “equine back pain” produce 11,700,000 results on Google. As for Google Scholar there are 53-thousand searches for peer-edited articles about equine back discomfort and the toll it takes on soundness, gait quality and the horse’s general health and wellness.

The truth is, horses weren’t necessarily designed to be ridden any more than we were designed to walk upright. It’s just something we strange humans decided to do. Don’t get me wrong, as an avid equestrian I’m very thankful for the advent of horse riding for sport, but with that development inevitably comes back strain. It’s our responsibility as owners, trainers, and advocates for our horses to address the issue.

Within my numerous Google searches, there were all the usual suspects: Saddle fit, rider-horse weight ratio, lack of proper muscling, etc. A common, recurring theme I noticed was that among the dressage crowd, the obsession with addressing equine back soreness was to a much higher extent than most other disciplines of riding. Going back to the earlier Facebook user’s comment, I think the reason that back pain is seen as more prevalent in dressage horses is that dressage riders as a whole seem to put the most focus on noticing their horses’ back pain so that it can be resolved.

Dressage horses at the higher levels are asked to “sit” down within their gaits, shifting their weight back on their hind end more and more with each level’s progression and as a whole to a much higher extent than many other disciplines of riding. This can absolutely lead to added stress on the hind end that could manifest in the horse’s back.

In my experience with my horse Nautica, and with where we are in our dressage training, his back pain tends to be primarily muscular. Despite his past vertebral problems, since starting dressage Nautica has actually had very minimal pain directly related to his sacrum or SI joints. I believe that is because at the Training level of dressage—one of the least physically demanding levels—Nautica’s back problems seem to come from tension being held in the muscles as he learns to use his body in a new way, not the actual stress on his joints.

A good ride often leaves Nautica looser and less achy than he is pre-warmup. Right now, our rides consist of good old, boring working trot, rhythm work, and long and low stretching. We’ve got our metronome app and an unfortunate amount of ABBA screwing with our Spotify algorithm, and we’re dead set and determined to leg yield our way into a tracking working trot. I’m not yet asking for any extreme amount of collection or “sit” within Nautica’s gaits, so the impact on his joints is relatively low.

Back discomfort in the ridden horse is virtually unavoidable. Despite Nautica’s seemingly cheerful, ears-up demeanor, he sometimes gets nervous about new exercises and can revert back to his old habits such as holding tension or speeding up. When he gets tight or choppy he can quickly become fatigued and sore. Our new dressage education is very helpful in having Nautica understand certain cues and concepts such as leg yielding and stretchy trot. By using these tools we can work around some of Nautica’s old habits and teach him to let go of that tension over his back, resulting in a much more productive response.

It’s a popular concept that dressage if done correctly, is a type of physical therapy for the horse. The intent is to make the horse stronger and more flexible in the long run. From my experience, a freely-moving, well-strengthened back seems to stay the soundest the longest. So why wouldn’t we want to work our horses in such a way that promotes longevity and soundness?

You can read the original full article here: Leg Movers vs. Back Movers, Sacred Horse by Gizelle Hamilton.

*While I agree with the gist of the article, I find the example images used problematic. The author is analyzing two very radically different horses. The comparison between the two does not produce a fair, accurate measurement of gait quality. In my personal, amateur’s opinion, a horse having an expressive front end isn’t inherently incorrect so long as the hind end can produce an equally expressive and balanced result. I think that the author is appropriate in their choice of image depicting a “leg moving” horse if it were to be analyzed without comparison to the second horse’s image.

Further examining the article, I believe it’s a bit absurd to state that all leg-moving horses work out of fear of pain. Horses are extremely resilient. Their adaptability is the reason they have survived this long and also why they cooperate in a sport that requires a “predator” animal to climb on to their backs and control them through a series of obstacles. Obviously, because of this, we should make their health and comfort paramount, but to assume that general riding without obsessing over the “throughness” of our horse’s backs will “result in the end of their working life and early destruction” (Gizelle) is a tad dramatic, don’t you think?

Nautica, for the first 12 years of his life was trained as a saddle-seat show horse–that’s about as leg-mover as one can get. Conformationally, he has a few physical disadvantages in terms of dressage, but his transition into the sport has been right on track if not more accelerated than the average restart with a similar history. For anyone who has met Nautica, I think it’s safe to say that he has suffered zero long term physical or emotional damage because of his upbringing. That horse hasn’t ever had a bad day in his life.

What are your thoughts on the subject?