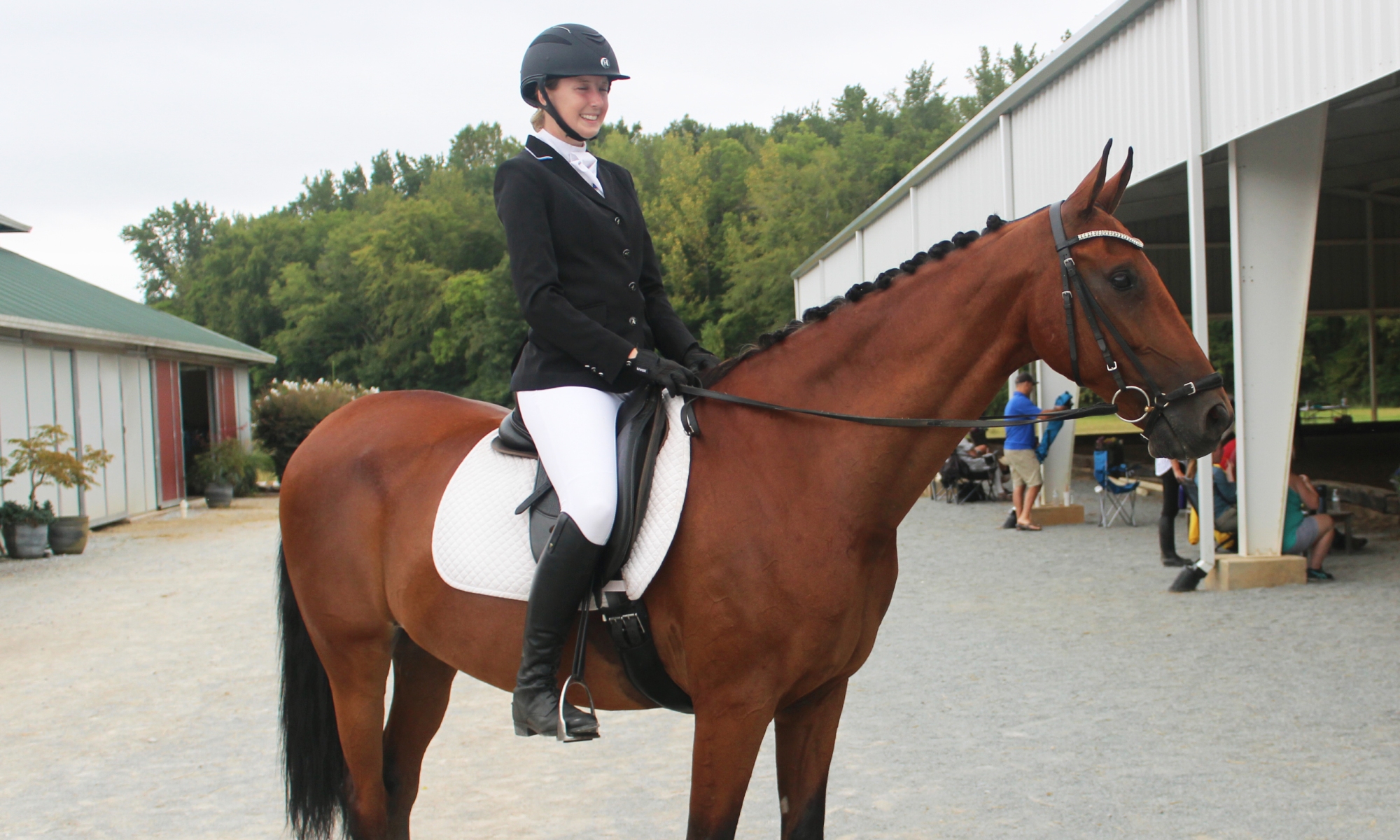 Continuing from Part I

Intro C. The dreaded intro C. Dreaded, at least, for a dressage duo that is not quite cantering consistently yet.

As I had mentioned in my last post, our judge and fantastic clinician, Jenni Hogan, had allowed Nautica and me to swap our two classes so that our walk-and-trot-only test proceeded our canter class. This was a major help in preparing us for what could otherwise be a complete cluster.

In the short clinic following our intro B test, Jenni walked us through some exercises that were intended to engage and strengthen Nautica’s hind end, specifically his ability to better “sit” down on his butt within his gaits and transitions. Now, we are nowhere near butt-sitting level—that comes later—but we can go ahead and start to prepare for these concepts now (e.g., our lord and savior, the turn on the forehand.)

Beyond simply strengthening Nautica’s hind end, our other major point of emphasis was to work on loosening up his back in an attempt to create more of a natural, swinging movement throughout his whole body within the gaits.

On a scale of rigid to rhythmic, Nautica is about as white girl as it gets. I’m talking pumpkin spice white. It doesn’t help the situation that I, myself, am incredibly lacking in the rhythm and timing departments and that Nautica and my lack of ability to relax on any level whatsoever only increase exponentially when our skills are combined. Dressage really is a dance. This is why I’m an eventer.

In addition to our turn on the forehand exercise from our last two posts, Jenni also had us bring back the “spiral in, spiral out” exercise. We had used this exercise a good amount when our dressage journey began early last spring, back when Nautica was first learning about the lateral movements. At the time, leg yields were incredibly difficult for him and it was more of a “spiral out in leg yield for 3 steps, steer back in haphazardly” maneuver. Now we can do a full 10-to-20 meter leg yield out on the circle, followed by an almost-half pass feel on the way back in.

The spiral out engages Nautica’s inside hind leg and increases his reach. This, plus slowing our trot tempo and “scooping” Nautica up with my lower leg really made a difference in how he covers ground. We could only hold this new dressage trot for about a half of an arena length, but there were definite moments of getting that true back-engaged trot feeling, rather than just our leg-flinging motion from before.

Miraculously, the same set of exercises also helped improve our canter. What started out as an unbalanced, disengaged canter depart suddenly became straighter and stronger with our new and improved engagement of the inside leg. It wasn’t a miracle fix my any means, but was enough to get us through a test.

With a better understanding of what I specifically needed to push for in the trot, and a newfound approach to the canter, Nautica and I were ready to conquer USDF introductory test C!

And it was a success! Nautica performed all of his gaits, leads, and geometry correctly, and even hung in there to stay relatively “chill” during his free walk. He earned a 64.5%, winning the intro C adult amateur division out of three, and earning the third-highest adult rider score of the day!

During our second clinic of the day, Nautica discovered that he is now a multi-talented showjumper. That’s right, that ground pole is raised a whole 4″ on one side. You could say things are getting pretty serious.

Nautica and I are planning another clinic in late September with Linda Strine returning to River Rock, and possibly even another horse show before the season ends! We’re excited to show off what all we have learned!