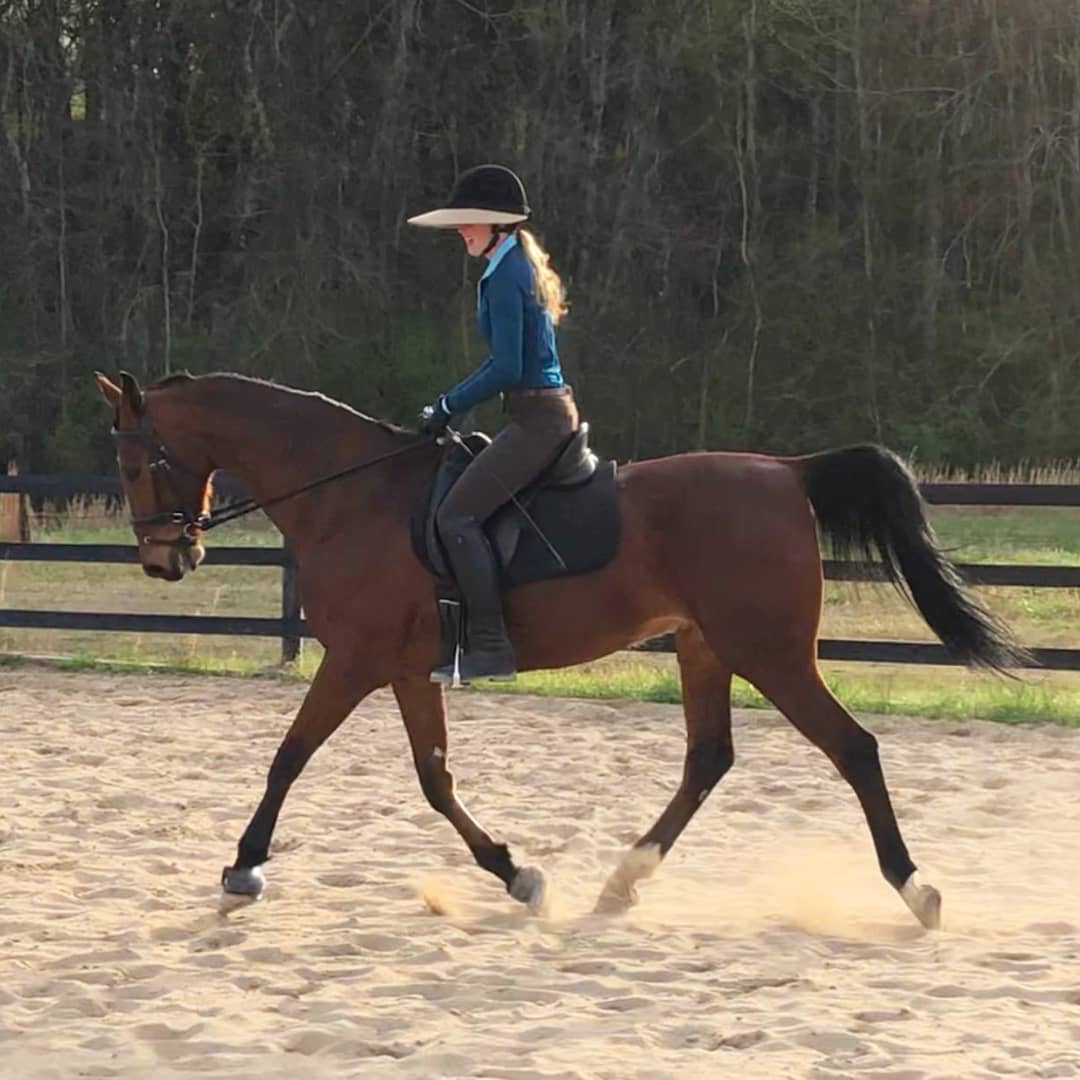 Friday marked Nautica’s first week–really, first five days–back in work after a two-week off period due to shoeing complications. His x-rays came back clear, bar shoe replaced with pour-ins, and our updated glue-on job is holding up beautifully. Nautica should be able to keep from twisting this one off, and the bones in his foot can continue to stay aligned longer.

After these past few weeks, I’ve really got to say that this horse works harder than any other animal I know. Despite his happy-go-lucky demeanor, there’s some intense higher math going on in that brain of his. In just five days we made some major leaps forward in Nautica’s dressage training.

Monday, I was mainly focused on catching back up to where we were before Nautica’s time off. Our goal was to push for moving forward in a ground covering motion and also to work on “unlocking” Nautica’s extremely tight neck. Flex, counter flex, etc… always working on a curve. Nautica has not trotted a single straight line in his entire four months as a dressage horse. This is because curves, flexion, and bend are the only way to “break up” his incredibly rigid neck. Nautica has got to learn to yield to the rein 100%. We did lots of circles and changes of direction on Monday.

Tuesday’s lesson was a follow-up on Nautica’s yielding to my rein aid. During our lesson, we reached a major breakthrough in obtaining Nautica’s complete suppleness of his neck and poll. It was a total lightbulb moment on his part. Finally! This was a huge deal for a longtime saddle-seat horse. These are all new and foreign concepts to him.

Once Nautica understood to let go of his death grip on the bit, he was practically a noodle neck. I was able to easily flex him in either direction without hitting that rigid, “brick wall” resistance that was there was before. This was also, naturally, contingent upon whether or not I could keep his undivided attention; Nautica has a tendency to get distracted and drag me in whichever direction catches his focus. Our exercise in suppleness proved that Nautica’s stiff neck was no longer a bit-respect issue, but a lack of understanding and, quite frankly, a gap in our previous training. Now that he is beginning to understand my rein suppling aid, we can move on to bigger concepts. I wouldn’t quite call this “contact” yet. Nautica doesn’t seem to want to hide behind the bit, but I do feel the need to send him much more forward than I did before in order to keep a feel of the bit and push him into the almost-contact. I like where this is going as it’s keeping him from reverting back to leaning on the bit.

Wednesday was a walk ride to both give Nautica a break and also to work on his bending off of my leg. Now that the rein aids are clearer, my leg aid is becoming much more intuitive to him. Once again, I have to keep his 100% focus or we lose it. Saddlebred things.

Thursday’s ride with Kelly was more of a focus on lateral work. Thanks to our rein-suppling epiphany, Nautica went from kindergarten concepts to Lateral 101 basically overnight. Leg yields: supple. Haunches in: getting there! Shoulder in needs work, but there was an attempt. Saddle-seat horses are often taught things a little backward in terms of controlling the shoulder. Nautica is no exception.

By our Friday schooling ride, Nautica began to really put it all together. We rode in the “scary” outdoor ring as a test of our newly acquired skills.

He was fabulous! After a brief warm-up and reminder of the aids, Nautica remained focused, supple and almost round for nearly the entire ride.

We did briefly re-attempt the canter during our Tuesday lesson. It has greatly improved! Now, both directions are three-beat, almost rhythmic and for the most part controllable. I can tell the gait is still difficult for him. We’re still a little quick and a tad crooked to the right. Because of this, and because of the improvement we’re seeing in him while focusing on other factors, we’re going to continue to put the canter on hold for another few weeks. He just got over a slight lameness scare and I feel no need to push for the canter now.

As always, the smile says everything. Nautica is working hard, getting stronger and excelling at each new concept we try on him. I’m so glad to get to enjoy these lightbulb moments with this horse all over again!